Book Get to know your dog, cat or rabbit with the Five Elements

In the book ‘Get to know your dog, cat or rabbit with the Five Elements’, Aleid Hillebrand and Eric Laarakker introduce you to the Five Elements – a movement that is thousands of years old in Traditional Chinese Medicine. They discuss the characteristics in addition to the physical and mental characteristics of our pets according to the Five Elements. When you get to know the strengths and weaknesses of your animal, you can better understand the animal, train and give the right extra attention that benefits its well-being and health.

Do you have a Labrador who is always looking for food or a Jack Russell who is always yapping when playing? A cat that always answers when you say something to her? Or a rabbit that always hunts just before being fed? Chances are they have not learned that through training. These are typical expressions of different character types and once you know them, it makes it easier to understand, accept and help your beloved four-legged friend.

In the book, for each of the elements – Wood, Fire, Earth, Metal and Water – the specific characteristics that are expressed in each animal are discussed. Examples are given of suitable sports and work – especially for dogs – appropriate to each element. Typical traits determine the best way of training for each element type. You will learn how to recognize the different elements in young animals and what their needs are when growing up and aging.

The owners will be discussed too. The interaction between humans and their pets is briefly described using the Five Elements. Which type of owner is a good or not a good combination with which type of animal and why? With the handy questionnaires at the back of the book you can quickly determine which element type your dog, cat or rabbit is.

Extensive attention is paid to nutrition, because all foods can also be classified according to the Five Elements. The right nutrition helps the animal to stay healthy, cheerful and in balance at every stage of life.

The many photos in this book bring the text to life and you will also find the most important information clearly arranged in numerous tables. That makes the book a complete reference work and a must-have for every lover of dogs, cats and rabbits.

Following on from the book ‘Horse types’ by Eric Laarakker (2006) we wanted to write a book about the character types of dogs, cats and rabbits. Not only because it is nice to be able to determine the character of your pet and get to know it better, but also because with this knowledge you can work preventively with health. Traditional Chinese Medicine (TCM) has traditionally focused mainly on disease prevention: ‘prevention is better than cure’.

The system of the Five Elements has been used in Chinese medicine for thousands of years to explain illness, to predict the course of the disease, how to best treat that problem at that time, and especially what to do about it. to prevent repetition. You can classify the character traits, physical and mental characteristics of your pet according to these Five Elements. Traits and characteristics they were born with that have very little to do with upbringing and that make the animals unique. By getting to know the character type you will know what their strengths are but also what their weaknesses are, both physical and mental. In this way you get to know your four-legged friend in a different way and you can adapt the way of training, and in general how you best deal with them, to the animal. You can also adjust their nutrition if necessary to prevent problems. You are then working on their health and wellbeing preventively.

Dogs, cats and rabbits (and other ‘small pets’) are usually chosen by feeling, a kind of ‘click’ that often occurs immediately. Such a click can also arise after seeing photos or videos online, or when you have become physically acquainted with the animal itself. However, animals are also selected based upon the pedigree, appearance or because it was ‘the last of the litter’ and there was actually no choice left. Especially in the latter case, frustrations can sometimes arise about the character, although in every animal there can always be traits that are less related to an owner.

In this book we want to show that some traits really belong to a certain type and no matter how much you train them, it will never disappear completely, it is inherent to the animal. When you know something like that, it may be easier to accept it so that you don’t have to ‘fight’ all the time. The different elements and the associated character types are discussed in detail so that you can place your pet at one or more of the Five Elements. With this you can find the strengths and weaknesses on the basis of this book and you know why certain behaviors or problems come up again and again. In practice, it often appears to be a relief to an owner when they learn that certain behaviors stem from their animal’s character type and that it is not their fault or the training.

The characteristics and needs of dogs, cats and rabbits are discussed, not only as adults but also how to recognize the characters of the young animals and what their needs are. Which type has little trouble with the transition from the nest to the new owner and which type has a lot of trouble with this? The needs of older animals are also addressed. How do you best deal with each element type when they are old? When you know your pet’s true need and act accordingly, it contributes significantly to the animal’s well-being. An animal may just be who he or she is in the depths of its being. He is then literally always ‘in his element’. 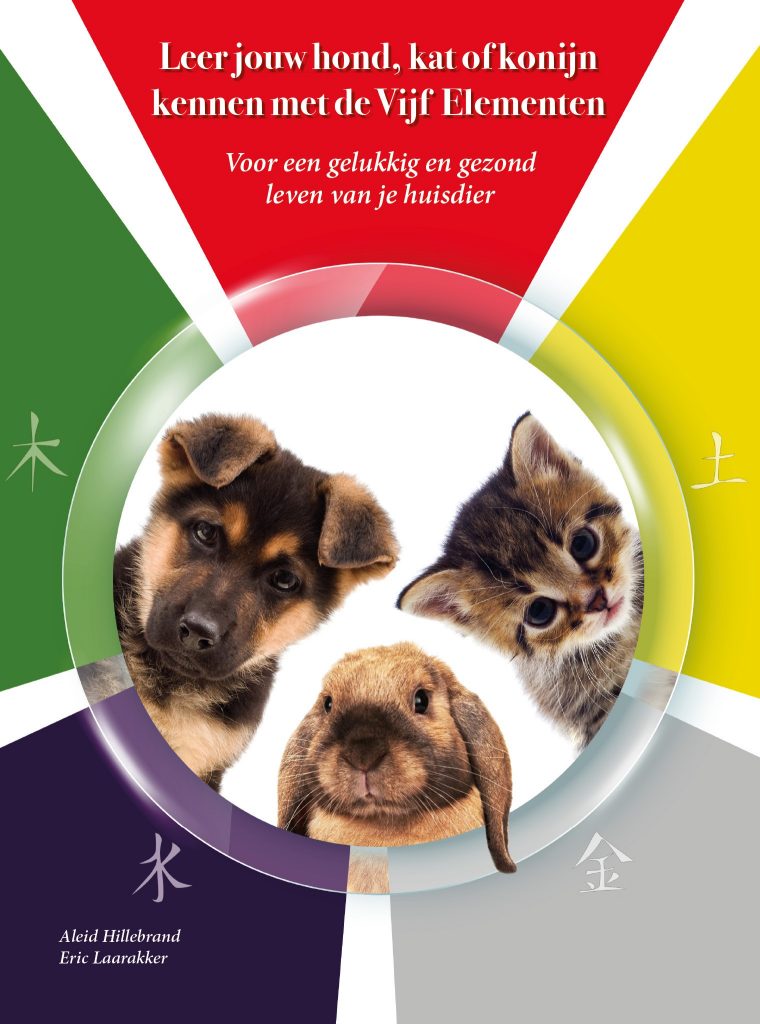 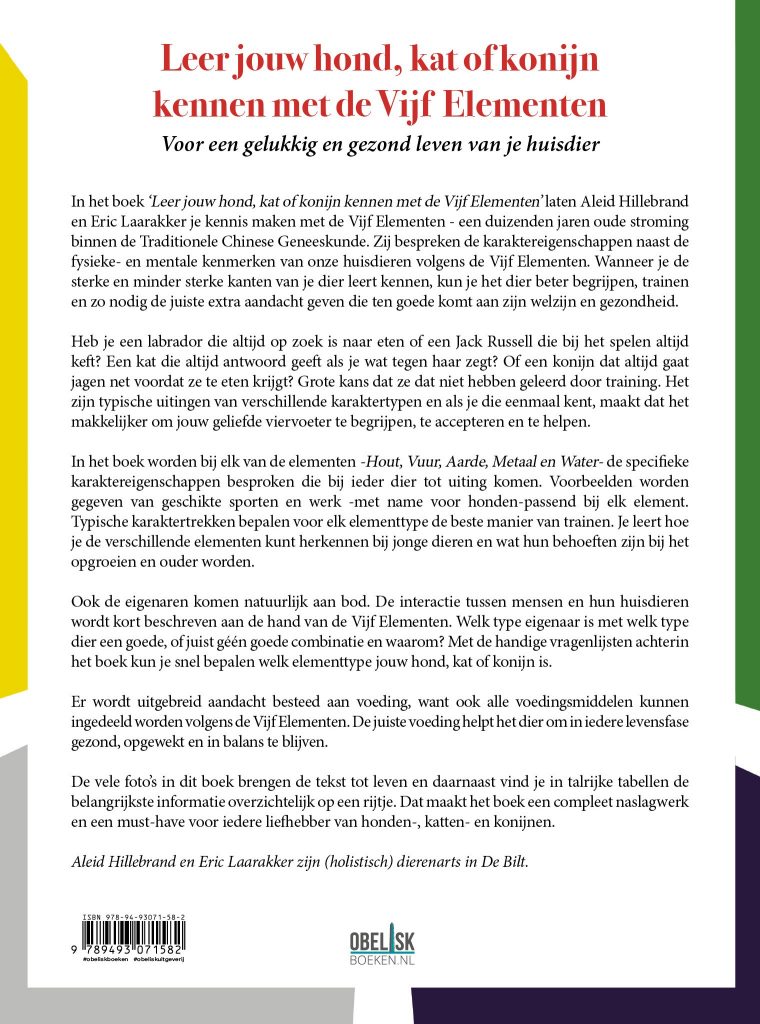